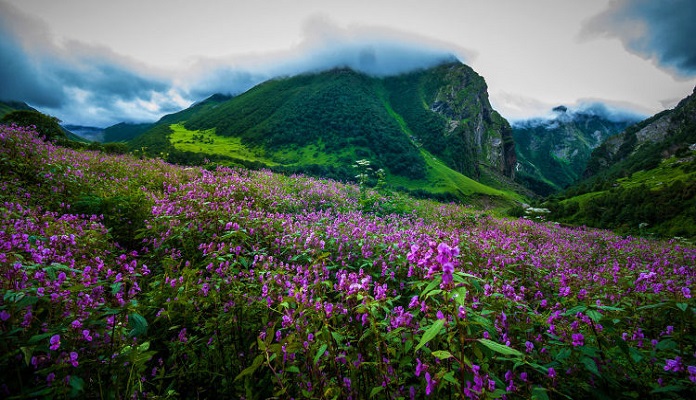 Valley of flowers is no less than heaven on Earth, located at Chamoli in the state of Uttrakhand it is an Indian National Park and also a UNESCO World Heritage site famous for its endemic alpine flowers and exotic Himalayan flora. The untouched beauty of this Valley has always attracted nature lovers, botanists, and adventurers. Hundreds of variety of flowers bloom between May to October which gives a feel as if the Valley of flowers is changing its color throughout the season. The Valley of flowers is famous not only among the domestic tourist but also thousands of international tourists visit this Valley every year.

Let’s check out the major attractions near the Valley of flowers.

Gurudwara Shri Hemkund Sahib is a pilgrimage place ofworship for the Sikh community in the Chamoli district of Uttrakhand. GuruGobind Singh, the tenth guru of the Sikh, meditated here for many years. Theword Hemkund means Lake of snow.

The Hemkund Sahib is situated at an altitude of 4329 meters above sea level. The best time to go on a trek of Hemkund sahib is in May-June and September- mid-October. Every year thousands of devotees visit this holy place.

Gaurikund is the pilgrimage site of Hindus. It is astarting point for the trek to Kedarnath Temple in Uttrakhand. It is located atan elevation of 6502 feet above sea level.

Gaurikund isassociated with the goddess Parvati wife of shiva who is also known as Gauri.The temple of Gauri is also present here. It is believed that goddess Parvatidid penance here to win over shiva’s heart this makes Gauri Kund a vitaltourist attraction.

Ghangaria is a small scenic village at an elevation of3050 meters above the sea level situated in the Chamoli district of Uttrakhand.It is at the confluence of river Pushpawati and Hemganga which forms LakshmanGanga.

It is the lasthuman habitation center on the way to Hemkund Sahib and about a distance of 5km before the Valley of flowers. The trekking difficulty in this part is easyto moderate.

The region experiences heavy snow in winter, so the best time to visit is between May-October. Sufficient hotels and restaurants are serving various dishes to the pilgrims. Ghangaria becomes a prominent spot while visiting the Valley of Flowers.

Vasudhara Waterfalls is one of the most captivatingsites in Uttrakhand. The Vasudhara falls situated near Badrinath at a distance ofaround 9 kilometers. The height of the fall is 400 feet.

The best time toexperience the beauty of Vasudhara falls is from May to June. Taking a bathunder the falls is a very rejuvenating and exhilarating experience. You shouldsurely plan a visit to Vasudhara falls.

Situated around the peak of Nanda Devi, the Nanda DeviBiosphere reserve was established in 1982 in the state of Uttrakhand. The NandaDevi national park is also a UNESCO world heritage site.

The Nanda DeviNational Park houses a wide range of flora and fauna. The Nanda Devi NationalPark is the closest to the Valley of flowers and offers a great view of thebreathtaking beauty of nature.

The park remainsopen to the public for six months in yea. The best time to explore the scenicbeauty of this place is from June to September as the climate is moderate. Itis one of the best trekking places in the Himalayas. You also get to see theexotic variety of flowers like Brahma Kamal here.

Pushpwati river emerges from Nilgiri and Rataban rangesin Uttrakhand. The river meets Hemkund at Ghangaria village. It is believedthat Pandavas gave the name Pushpawati during their years of exile when theysaw the flowers floating down the river.

Valley of Flowers is a natural wonder which attracts a good number of tourist and trekkers every year. The trek is popular among beginners as well as ardent trekkers. While trekking, you can feast your eyes with thousands of flowers, glistering streams, and snowcapped mountains, making it the most beautiful trek in the world and must be on the bucket list of every trekker.