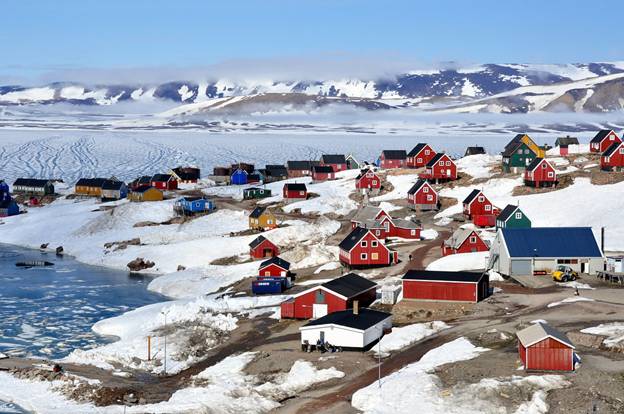 The adventure has many faces: riding your first wave ofsurfing in Sri Lanka, standing on the abyss on your hut hike and beingoverwhelmed by the view, paddling through Canada with your canoe while watchingorcas, moose, and bears, and lie on one of the most extraordinary beaches inthe world and forget everything around you – all this means thrill and freedomat the same time!

However, adventure is also very different and excitingas the digital world. Namely, when you discover aplace in this world that you had no idea that it exists! No people, no cars andmostly no internet, but untouched nature, wild animals and lots of space! Inthe most remote places in the world, the adventure will make your heart beatfaster with its originality, wildness, and loneliness – a feeling that you areguaranteed to get addicted to!

In this article, we will tell you in which corners ofthe world extraordinary travel destinations are waiting for you, how you canfind them and why the long journey is worthwhile!

If you want to visit a place on your next trip to Asia that not many people have seen yet, you should plan a trip to Motuo County in China!

Motuo is the only one of over 2,000 Chinese counties that could not be reached by road until a few years ago. Many attempts by the authorities to connect the approximately 10,000 locals to the road network initially failed.

Although the latest highway project was completed in 2012, you still have the feeling in this area that time has stood still at some point!

Read Also >Things To Do In Beautiful Cities Of Indonesia

If you feel like a lot of loneliness, you should go to Tibet. More specifically, in the Changtang region!

With 700,000 square kilometers, Changtang in the northwest of Tibet and southeast of Ladakh is one of the largest, most remote, and most untouched wilderness areas in the world.

The infinite expanses of the peaks, which are up to 7,000 meters high, are uninhabited except for a few nomads. During your trip, you often don’t meet a single person for days! But all the more wild animals.

In addition to the typical yaks that roam the landscape here, you have the opportunity to observe kiang donkeys, chiru herds, snow leopards, and even brown bears in their natural habitat.

Have you always wanted to spend a few days on a lonely adventure island far away from your everyday life? Then Tristan da Cunha is just the thing for you!

With 2,430 kilometers between you and the next piece of land, you can switch off in the capital Edinburgh of the Seven Seas like nowhere else. With just 267 inhabitants, Tristan da Cunha is officially the most remote inhabited place in the world.

For your journey to the deserted island, you have to travel the 2,800 kilometers from Cape Town within ten days by ship because there is no airport here!

Easter Island in the Southeast Pacific is high on the list of many adventurers, and not without reason! After all, the small island is one of the most remote places in the world.

In addition to loneliness and rocky coasts, some unique, bizarre things are waiting for you here.

During your next trip to South America, the four-hour flight from Santiago is worth a short detour.

The most famous sights of Easter Island are, of course, the Moai. The huge stone sculptures with their striking oversized faces are spread all over the island.

You can usually find them near the coast, with a view of the countryside. What these impressive statues are all about is still a mystery to this day. Especially at sunset, the characters in Ahu Tahai are guaranteed to give you a shiver!

Greenland means snow and ice as far as the eye can see, and in between, there are always a few houses on impressive fjords, which you can either reach by snowmobile or dog sled!

In principle, if you plunge into your Greenland adventure with the aim of solitude, it doesn’t matter where you end up on the largest island in the world.

After all, less than 60,000 people live in the country, which is about six times the size of Germany. That means: You will find loneliness here on every corner.

The Ittoqqortoormiit settlement on the east coast of Greenland is particularly remote because the nearest village is 800 kilometers away! It is only since 1924 that people have lived in colorful wooden houses in the middle of the eternal ice.

There are now a good 450 people who call this patch of the earth their home all year round.

If you think that there are no white spots on the map these days, check out the Kerguelen Islands in the southern Indian Ocean! The entire archipelago is over 3,000 kilometers from civilization and is inhabited by only a few researchers.

As an adventurer, it is almost impossible to get to the islands, which are also called the Desolation Islands.

There is no airport, and the four ships that leave for the deserted islands every year are almost exclusively reserved for the research team.

If you are not a scientist, but it is now itching to see this unknown corner of the world with your own eyes, you should secure a place on one of the few cruise ships that come by and anchor for a while!

Some corners of the earth are so unreal that you feel like you have landed on another planet. On Devon Island in Canada, you can even take that literally, because the weather and climate conditions are similar to those on Mars! NASA has recognized this for years.

It’s not for nothing that the island is the training and testing ground for astronauts and space vehicles! However, your immune system will be at its maximum peak when roaming around this region.

You don’t have to fly to the end of the world to escape modern civilization for a while! On the contrary: at the end of Europe, a small Scottish island is waiting for you, which is so completely different from the rest of the world.

On Foula, the most remote inhabited Shetland Island, you feel as if time had just stood still several decades ago. Almost 30 people who live here all year round were only connected to the electricity grid in the 1980s.

You won’t find a supermarket, pub or internet connection here! Instead, the following applies here: switch off, forget your everyday life, discover the spectacular nature, and listen to the locals when they talk about their fascinating island life!

From Germany, Australia is quite remote, and you have to prepare for several stops on your flights to Down Under. But as a lonely country, you have never really had the small continent on your screen.

However, the Cape York Peninsula in northern Queenslandis one of the loneliest places in the world and guarantees the wildest part ofAustralia. Already the journey along the 571 km long Peninsula DevelopmentalRoad is remarkable: On the mostly unpaved road, you go further and further intothe wilderness! However, your road trip will only become a real adventure ifyou turn onto Old Telegraph Road at Bramwell Junction. The construction is almost completed.

In your stressful everyday life, you will want to be on a deserted island with white sandy beaches, turquoise blue sea, and palm trees – Palmerston Island is just such a place!

The island in the South Pacific is not only the most remote atoll of the Cook Islands but one of the most bizarre places ever! The reason for this is the islanders; they all descend from a single English.

William Marsters came to the small island in the 1860s to build a coconut plantation there. With his three wives, he had 23 children, and when he died in 1899, he already had 134 grandchildren! Today, more than 2,000 of his descendants live around the world – 60 of them on Palmerston Island.

To prevent incest, a couple can only marry here if they do not come from the same of the three families of origin.

Nowadays, the world seems so small, and no country is out of reach. Regardless of whether Asia, America, Australia, or New Zealand, travel destinations that were reserved for a few 100 years ago are now open to the whole world.

Adventure junkies get their money’s worth in these countries: from bungee jumping to ziplining to skydiving, the next adrenaline kick is never really far away!

However, even in the age of cheap airlines, AirBnB, and substantial outdoor offers, there are still excellent places that are so remote and lonely that not many people make their way there.

It is mainly islands like Tristan da Cunha or Palmerston Island and unreal landscapes like on Devon Island or Kamchatka that wait for you with an originality that is second to none!

These extraordinary travel destinations don’t need anyoutdoor centers or adrenaline playgrounds! On the contrary: the thrill can befelt at every moment. A simple walk, a short conversation with the locals, or anight in the middle of nowhere will be an adventure of a lifetime!

Which of these places would you like to go to right now?